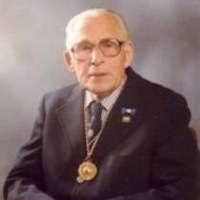 Arthur Troop was born on December 15th, 1914 in Lincoln, England where he spent his childhood. He later studied at Ruskin College, Oxford and thereafter at Avoncroft Agricultural College in Worcestershire.

On June 19th, 1935 Arthur joined the Lincolnshire Constabulary. After the Second World War he set about the task of restoring friendship amongst police officers, with the goal of founding a worldwide friendship organisation. At that time he experienced considerable opposition from his superiors and from the British Home Office.

Happily not all of his superior officers doubted Arthur’s competence and, on the first day of January 1950, the IPA was founded, using the motto Servo per Amikeco which, in Esperanto, means ‘Service Through Friendship’. Arthur became the first Secretary-General of the British Section and his vision became a reality.

He worked untiringly to encourage the founding of other national sections, and the IPA message quickly took hold. In 1955, at the inaugural International Executive Committee meeting in Paris, Arthur became the first International Secretary-General, a position he held until he stood down in 1966.

In the Queen’s Birthday Honours List of 1965 Arthur Troop was awarded the British Empire Medal (BEM) for his work in founding the IPA. In addition to the BEM he later received many awards from abroad including the Cross of Honour from the President of Austria, an Honorary Doctorate from Canada, and the Golden Sword of Hungary by that country. The Arthur Troop Statue was erected in Hungary and a bust of Arthur Troop has recently been unveiled at Schloss Gimborn in Germany. Annual scholarships are also awarded to IPA members in Arthur Troop’s name.

He retired in 1966 and became an ex-officio member of the International Committee (Permanent Executive Bureau). He regularly attended international meetings where his advice was respected and heeded. At the 11th World Congress in 1985 he became the first recipient of the Association’s Gold Medal and at the 26th IEC Conference, in 1995, Arthur was awarded the IPA World Peace Prize.

Sadly, following a long illness, Arthur passed away on 30th November 2000. At a dedication service in 2003 his widow, Marjorie, unveiled a Memorial Plaque in his honour at Christ Church in Stamford, Lincolnshire.

View letter below from Arthur Troop outlining the IPA Emblem. 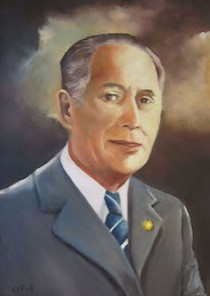